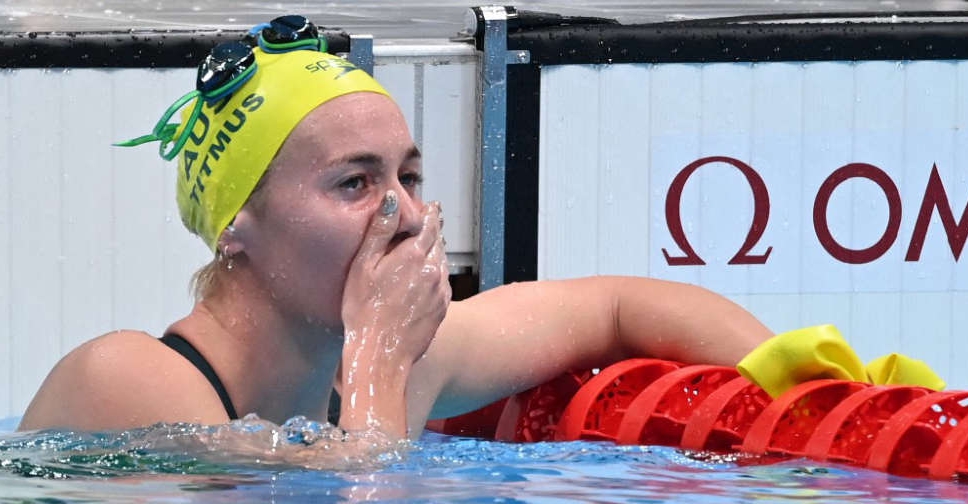 Australia's Ariarne Titmus lit up the pool with a stunning victory over Katie Ledecky at the Tokyo Games on Monday, but when it comes to celebrations it was her wide-eyed, hip-thrusting coach Dean Boxall who deserved an Olympic gold.

As Titmus reached for the wall to dethrone her American rival in the 400m freestyle, Boxall burst into a frenzy of exuberant celebrations, punching the air and darting around the spectator gantry.

While the 20-year-old Titmus was being congratulated by her fellow swimmers, the crowd were mesmerised by Boxall as he leapt in the air, tore off his mask and screamed ecstatically, headbanging with his surfer-like hair tumbling around him.

This is greatest thing - The Coach of the Australian Olympic team after Ariarne Titmus wins gold in the 400m free. pic.twitter.com/g0gpcXCogR

"Yeah, I lost it," he told reporters.

"I think I went outside of my body. I just lost it. I've been with this girl five years, you know, having a dream together."

Asked if anyone had objected to his exuberant display, Boxall said: "Americans might not like it, I don't know, but they jump around as much as me ... I can't help it.

"I just don't turn off and that's probably why I let it out."

"She's pretty grounded. She came up to me, I think I was more emotional than her. She's basically saying 'you need to settle down'. She's calm. She's unbelievable," he said.

"She's just the most humble girl, she's a beautiful kid."

Boxall told Australia's Seven network he had taken the mask off by mistake and that his frantic shaking of the barrier was like his childhood hero, American wrestler 'The Ultimate Warrior', used to do to the ring.

Titmus had nothing but praise for her coach, whose antics played out on television globally and went viral on social media.

"He means everything to me," Titmus said. "We didn't discuss what I wanted to do in the pool. It was more of a 'have fun' moment. I love you. Have fun."

Nearby staff in the arena jumped to avoid Boxall as he lurched unpredictably and it took the embrace of a fellow Australian team member to calm him down.

"I have seen little snippets of it," Titmus said of Boxall's reaction. "That's just the way Dean is, he is just passionate about what he does, he becomes so animated. For him as much as it is for me. He puts 100 per cent into being a swimming coach."

Five-times Olympic gold medallist Ledecky held a good lead in the early part of the race before Titmus began to reel her in and burst out of the final turn to power her way to victory.

Titmus said she became emotional during the medal ceremony knowing her coach was watching and what it meant to him.

"It was actually hard to contain it," Titmus said.

"I could see Dean on the other side bawling his eyes out. You don't really see that often, so, that made me want to tear up."