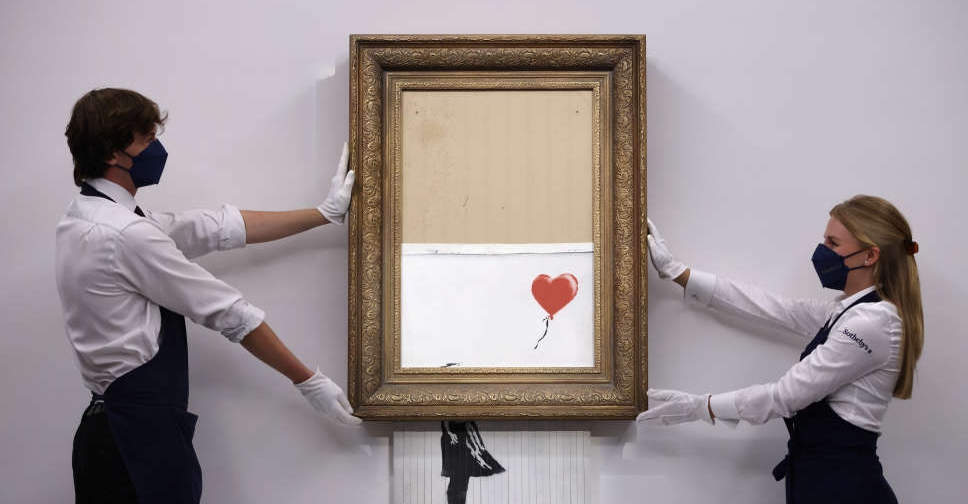 A half-shredded Banksy picture now called "Love is in the Bin", sold at auction in London for a record AED 80 million.

After slamming the gavel, Sotheby's auctioneer Oliver Barker joked saying the artwork was "still there, I can't believe it".

At an October 2018 Sotheby's auction onlookers gasped when the then-titled "Girl with Balloon" was sucked into a shredder as the hammer fell following a bid of 1,042,000 pounds.

Sotheby's said the work fitted into an illustrious history of anti-art including Marcel Duchamp's anonymous submission of Fountain, a porcelain urinal remounted on a pedestal in 1917, to Ai Weiwei, who photographed himself intentionally dropping an alleged Han Dynasty urn.

"When Girl with Balloon 'self-destructed' in our saleroom, Banksy sparked a global sensation that has since become a cultural phenomenon," said Alex Branczik, Sotheby's chairman of modern and contemporary art.

"During that memorable night, Banksy did not so much destroy an artwork by shredding it, but instead created one. Today this piece is considered heir to a venerated legacy of anti-establishment art."

Banksy, whose real identity is unknown, rose to fame for sharply ironic outdoor graffiti with political themes. Once a small-time graffiti artist from the English city of Bristol, his artwork has become hugely popular and valuable.