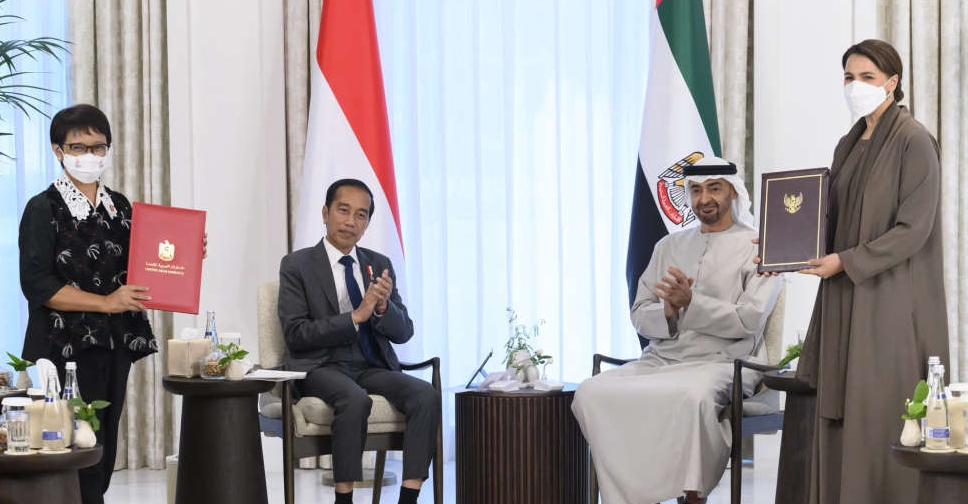 The UAE and Indonesia have inked a Comprehensive Economic Partnership Agreement (CEPA).

The accord will remove or sharply reduce duties on most goods traded between the two countries.

It's designed to increase annual bilateral trade to $10 billion within five years by removing trade barriers on a wide range of goods and services, creating new opportunities for UAE exporters.

The UAE has signed similar deals with India and Israel this year.

Sheikh Mohamed said the latest agreement with Indonesia builds on the longstanding ties between the two nations and heralds the beginning of a new era of increased trade, investment and economic cooperation.

The UAE and Indonesia launched CEPA negotiations in September 2021.

The signing of the Comprehensive Economic Partnership Agreement between the UAE & Indonesia, in the presence of President Joko Widodo, builds on the longstanding ties between our 2 nations & heralds the beginning of a new era of increased trade, investment & economic cooperation. pic.twitter.com/rkS1Zt5mMe

During the meeting in Abu Dhabi, Sheikh Mohamed and Widodo also exchanged their views on regional and international issues of mutual concern.

Sheikh Mohamed stressed the UAE’s keenness to enhance cooperation and coordination with Indonesia, and lauded Widodo’s role in strengthening the overall relationship between the two countries in recent years, as well as his keenness to ensure the CEPA’s success.

The Indonesian President commended the deep-rooted relations between the two countries, noting that they share the same human values and belief in the importance of coexistence and cooperation.