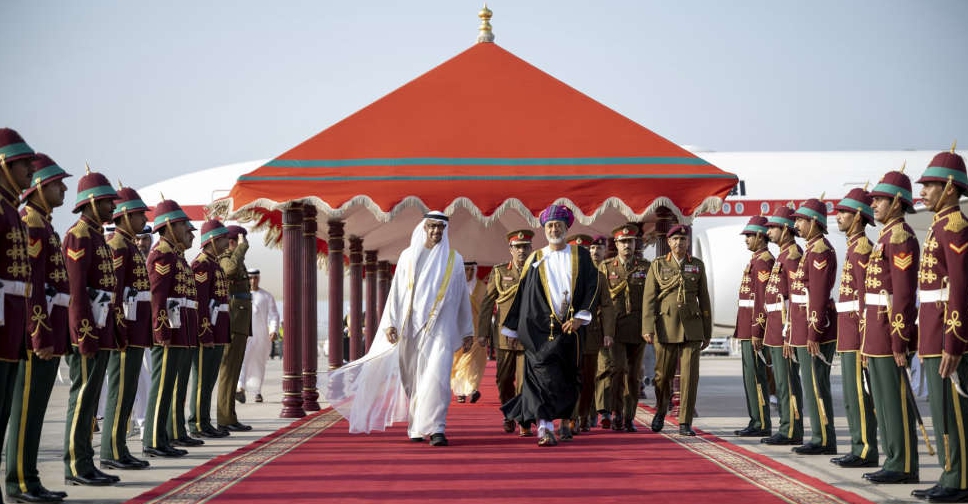 The UAE's President His Highness Sheikh Mohamed bin Zayed Al Nahyan has arrived in Muscat, marking the start of his two-day state visit to Oman.

He was welcomed by His Majesty Sultan Haitham bin Tariq Al Said, upon his arrival at the Royal Private Airport.

Fighter aircraft of the Royal Air Force of Oman escorted the UAE President's plane as it entered Oman's airspace in celebration of his arrival.

Sheikh Mohamed and Sultan Haitham exchanged friendly talks, discussing the deep-rooted and longstanding bonds that the two countries and their people share.

On arrival at Al Alam Palace, the Emirati delegation was greeted with a guard of honour consisting of hundreds of members of Oman's Royal Cavalry and the Royal Guard.

Thank you to my brother Sultan Haitham bin Tariq for the warm welcome to the Sultanate of Oman. Our two nations are united by deep bonds of history, friendship and common interest, and I look forward to working together to continue forging an even brighter future for our people. pic.twitter.com/ZLc4bg3yMX

Sheikh Mohamed hailed the longstanding ties between the UAE and Oman and highlighted  the special place that Oman holds in the hearts of the Emirati leadership and people.

He said the two countries have a shared social and cultural fabric based on deep bonds of brotherly relations.

The UAE President was awarded the Order of Al Said Medal by Oman's Sultan Haitham bin Tariq, while Sheikh Mohamed awarded the Omani leader the Order of Zayed in recognition of his efforts to boost co-operation between the two countries.

The Order of Al Said is the highest order of Oman and is presented to presidents, monarchs and heads of state in appreciation of their exceptional role in strengthening relations between their countries and the Sultanate.

The Order of Zayed is the highest decoration awarded by the UAE and is presented to kings, queens, heads of state and presidents.