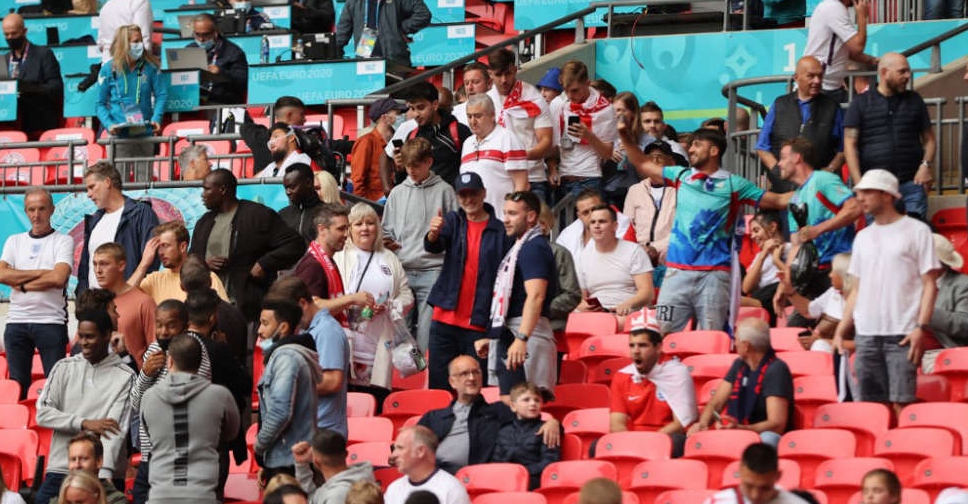 England have been ordered to play their next two home games in UEFA competition without supporters present after disturbances during their Euro 2020 final against Italy at Wembley in July.

The ban on fans attending the second game has been suspended for a probationary period of two years, while the English FA has been fined 100,000 euros ($116,000), European football's governing body said in a statement on Monday.

The July 11 final, won by Italy in a penalty shootout, was marred by clashes between supporters and officials in and around Wembley, with ticketless fans breaching security cordons.

The FA has commissioned an independent review to look into the disturbances.

"Although we are disappointed with the verdict, we acknowledge the outcome of this UEFA decision," the FA said.

"We condemn the terrible behaviour of the individuals who caused disgraceful scenes in and around Wembley Stadium at the Euro 2020 final, and we deeply regret that some of them were able to enter the stadium."

UEFA opened a disciplinary investigation two days after the final and the FA was hit with four charges for invasion of the field by fans, throwing of objects, disturbance caused during the national anthem and the lighting of fireworks.

The FA was fined 30,000 euros ($34,734) earlier in the tournament for crowd problems after a laser pointer was shone at Denmark goalkeeper Kasper Schmeichel during England's semi-final victory, also at Wembley.

British police made several arrests during the final and said 19 officers were injured.

Home Office figures showed that of the 90 football-related arrests made at Euro 2020, 39 were at the Italy match.