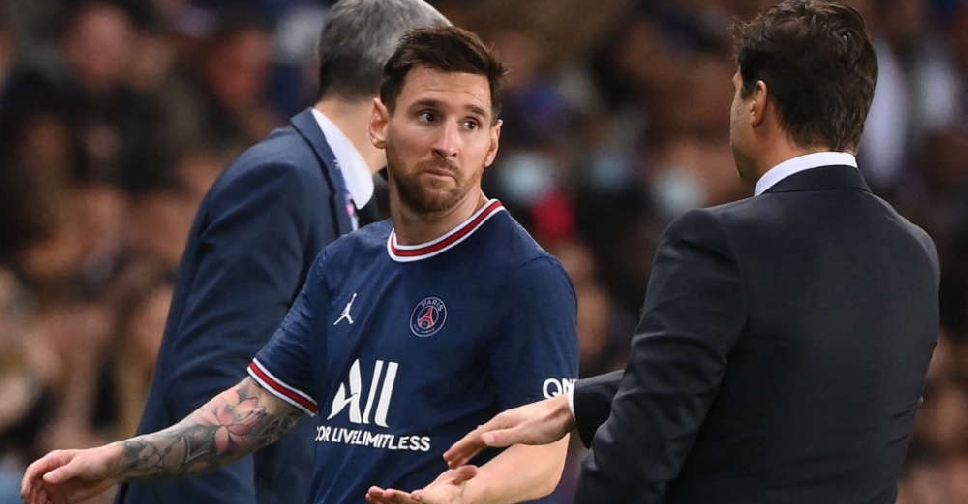 Paris Saint-Germain's Lionel Messi (L) looks at head coach Mauricio Pochettino as he leaves the pitch during the match between PSG and Olympique Lyonnais in Paris on September 19, 2021. FRANCK FIFE / AFP

Lionel Messi has been ruled out of Paris St Germain's match against Montpellier as he has not fully recovered from a bone bruising injury, but manager Mauricio Pochettino hopes he returns for their midweek match against Manchester City.

Messi suffered a knock on his left knee and an MRI scan earlier this week confirmed signs of a bone contusion. He missed PSG's 2-1 victory at Metz on Wednesday.

The 34-year-old Argentine forward, who joined the French club from Barcelona on a two-year contract in August, will be assessed again on Sunday -- ahead of the Champions League home game against City on Tuesday.

"Messi has started to run today... We are going to assess him and we hope he improves," Pochettino told reporters on Friday.

"On Sunday, we will be able to give a positive update. We hope everything goes well and he will be available again... Yes, we hope he can play (against City). We have to be cautious."

Pochettino said the City match will not affect his selection on Saturday, with Angel Di Maria expected to play the league game as he remains suspended in the Champions League after his red card in last season's semis against the Premier League side.

"We will see, there are different options and different systems. We will see who gives the team the right balance. We also have the flexibility to change as we go," Pochettino added.

"Mauro Icardi is a player who contributed a lot up until his injury. He then recovered and has made a big impact. Of course, he offers us an alternative in our attack."

PSG midfielder Marco Verratti will return to training on Sunday while defender Sergio Ramos, who has yet to make his club debut, continues to train individually as he recovers from a calf injury.

Montpellier lost their two main goal scorers from last season -- Andy Delort and Gaetan Laborde -- in the transfer window but Pochettino said he was still wary of the side who have already scored 15 league goals, second behind PSG's 20.

"They work very hard and we've seen that in our preparations," Pochettino said. "They have quality players and it's not just their fast transitions, they can also develop their play and they are patient in their buildup.

"They are a team that plays attractive football. We're expecting them to make it difficult for us."

PSG are top of the Ligue 1 standings with a perfect win record from seven games while Montpellier are 10th.